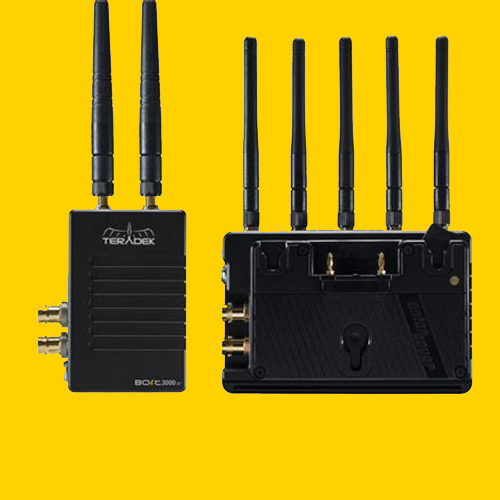 With the Teradek Bolt 3000 XT 3G-SDI/HDMI Wireless Transmitter you can transmit visually lossless 3G video signals to a Bolt 3000 receiver with zero latency. The Bolt XT is also compatible with the Sidekick II and 703 Bolt. The transmitter unit itself can be secured to a camera or other SDI/HDMI video source via a built-in 1/4″-20 threaded hole, as well as two M3 threaded holes. The included antennas provide a powerful signal that can travel up to 3000′ line-of-sight.

This Teradek Bolt XT 3000 SDI/HDMI Wireless TX/RX Deluxe Kit includes one transmitter and two receivers with installed passthrough Gold Mount Battery Plates, a panel array antenna, plus a variety of accessories. This enables you to immediately start transmitting up to 1080p60 video from either an SDI or HDMI source. The transmitter/receiver pair features a 3000′ line-of-site transmission distance when used together, and you can send and receive visually lossless 3G-video signals from a Bolt 3000 transmitter with zero latency. The transmitter features a loop out SDI connector so you can feed your on-camera monitor. The included panel array antenna is directional for improved signal reliability in one direction when compared to the performance of the included omni-directional antennas.