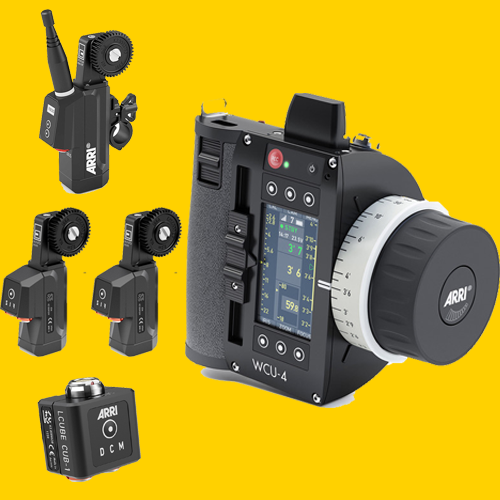 The ARRI WCU-4 Wireless Compact Unit is a 1-3 axis handheld controller featuring an integrated lens display. Control camera functions, focus, iris, and/or zoom from a distance, such as when shooting handheld or using a stabilizer, gimbal or crane. The WCU-4 is compatible with the ARRI ALEXA Mini, ALEXA Plus, and Studio cameras, and with ARRI UMC-4, SMC-1, EMC-1, and AMC-1 motor controllers. Camera functions are controllable for ARRI ALEXA Mini, Plus and Studio, and ARRI AMIRA when used with the UMC-4 motor controller.

Vibrating markers and a backlit display make it easy to use the WCU-4 in low light levels. Multiple 3/8″-16, 1/4″-20, and M4 mounting points enable you to attach the controller to a rig when convenient.

The ARRI cforce mini RF is a compact lens-control motor with an integrated white-coded RF radio module that eliminates the need for a separate receiver unit on your camera rig. Suited for gimbal, stabilizer, handheld, and drone setups, the cforce mini RF can be daisy-chained with both classic cforce motors and with ARRI LBUS components. Power and run/stop control is supplied for ARRI and select third-party cameras through the motor’s CAM connector.

The versatile cforce mini RF can be linked with up to two additional motors, and can be paired with up to three hand units for setups where splitting F/I/Z control is preferred. Features include 14 radio channels, lens metadata support for focus mapping, improved resistance to interference, and the ability to display data on a WCU-4 hand unit.

The ARRI LCUBE CUB-1 Serial Converter changes LBUS protocols to serial protocols and vice versa. This multipurpose protocol converter can be used for different functions in various camera setups. Use the CUB-1 and one or more cforce motors (not included) to connect a UDM-1 Distance Measure to an ALEXA Mini. The CUB-1 will also enable ARRI electronic control system accessories such as Master Grips to communicate with select 3rd-party cameras.